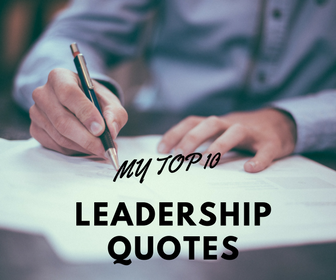 Quotes that will help you in creating more innovative leadership strategies.

What I have learned is that people become motivated when you guide them to the source of their own power and when you make heroes out of employees who personify what you want to see in the organization.Anita Roddick, founder of The Body Shop
Leadership is not domination but the art of persuading people to work toward a common goal.Daniel Goleman, Psychologist and science journalist
Leaders who project strength before warmth run the risk of eliciting fear.Tanmay Vora
I want every little girl who’s been told she’s bossy to be told again she has leadership skills.Sheryl Sandberg, COO Facebook
A titled leader relies heavily on position power to get things done: a natural leader is able to mobilize others without the whip of formal authority.Gary Hamel, International Management Consultant
Just because you are CEO don’t think you have landed. You must continually increase your learning, the way you think, and the way you approach the organization.Indra Nooyi, CEO PepsiCo
Management and leadership are not separate spheres. The two skills work together in the larger realm of communityship.Henry Mintzberg, Professor and management expert
Leadership defines what the future should look like, aligns people with that vision, and inspires them to make it happen despite the obstacles.John P. Kotter, Professor of leadership HBS
Leadership is the ability to guide others without force into a direction or decision that leaves them still feeling empowered and accomplished.Lisa Cash Hanson, Snuggwugg CEO
Treating employees benevolently shouldn’t be viewed as an added cost that cuts into profits, but as a powerful energizer that can grow the enterprise into something far greater than one leader could envision.Howard Shultz, Executive Chairman and former CEO of Starbucks

RT @KevinLeichtman: One of the hardest teacher skills is to walk into a new year without the weight of last year. One comment from a stude…
h J R
@askwendyw

RT @mraspinall: I stopped giving detentions when I finally understood that behaviour is a form of communication. I was punishing the act, r…
h J R
@askwendyw